A huge congratulations to 2 of our local Coaches,

who have only gone & won their categories for the UK Coaching Awards!!!!!

from all over the Country, for their dedication and to recognise their achievements.

and Jake Richardson won Developing Performance Coach of the Year for the second year running. 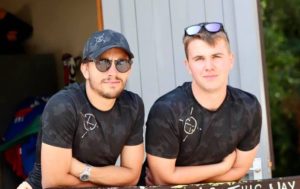 “Fourteen years ago it all began, I clipped a set of skis on to my size four ski boots at the local dry slope in Trowse.

I progressed through the ski club throughout my youth, junior club! skiing with people with the same age & ability,

wannabes the start of the roots to my ski racing obsession, where I learnt to start skiing gates and decided that this is the sport for me

giving me a fithteen second adrenaline moment battling around a course and trying not to ski out.

As time went on, I was accepted into the race team!  During this time, things got faster and training progressed.

At this point I realised that I wanted to give something back to the coaches who helped me get to where I am today!

Back in May 2018 I began my journey of becoming a ski coach, after spending 12 years on skis.

My main focus during this time was to keep skiing FUN and rewarding for all.

I spend most of my time down Norfolk Snowsports Club coaching the younger generation.

April 2019 I managed to gain my coaching license with the help and support of the coaches I work closely with at the club.

I regularly coach down at the slopes three to four times a week, working with a mixture of abilities from the Wannabe racers to the Race team,

to develop the best techniques to benefit there performance on the slopes and take what they’ve learnt into races across the globe.

Over the past summer I coached for two ski camps down at Norfolk Snowsports,

the first one being the Junior club camp which is all about bringing new athletes into the sport and learning the ropes.

The second being The Cross Collective ski camp directed by my coaching buddy Jakey Richardson,

this week saw 40 kids going home each day, with a massive smile, learning something new and making new friends each day.

Skiing is more than a sport, it’s a community which is why it’s very close to my heart.

Recently it has came with great surprise that I was shortlisted for ‘Children’s coach of the year’ something I completely wasn’t expecting.

Creating a relaxed and fun training program is the key to a successful young sportsman”.

“Having come from an intense alpine racing career and dropping out at an early age due to both financial and personal pressure related causes,

by sticking close to our philosophy we have only created success.

In our first season of business, we took home 23 medals in the Audi Ski Cross tour in Switzerland.

Competing against some of Europe’s toughest and talented kids. In our second year of business, we took home 58.

Putting too much pressure on young athletes draws the love out of their sport which subsequently results in them dropping out.

By changing the training program regularly, keeping it fresh and fun, we keep the young athletes engaged and eager.

It’s not rocket science! With this ethos, we will be responsible for our countries future Olympians.

to deliver what we do. None of this would be possible without their support so my biggest thanks goes out to all those who made this award happen.

Thanks to our sponsors Snowfit Revolutionz, The Collective Dairy and Norfolk Snowsports Club for their ongoing support.”