A great inclusive day of racing

We had 125 competitors enter from the race team, non-racers, junior clubs (ski & board),

The youngest competitor on the day was 6, the oldest was Ronald Cooper, aged 73 from Norwich.

He started racing on dry slopes in 1968 and has entered races in the UK and abroad every year since then.

In 1997, Ronald was the over 50 Champion at the All England national competition held in Sheffield.

“I love racing and the Club Champs has a fantastic atmosphere.  We are always welcomed with open arms and hope to race for many more years”.

This year, Ronald and Douglas Cooper, aged 68, were awarded the ‘Legend’ Cup in recognition of the huge number of years they have been racing. 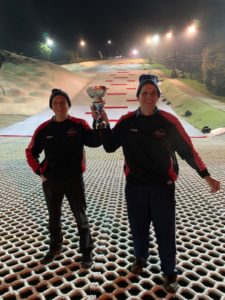