In temperatures in excess of 31° with no shade or breeze, the task of moving heavy, 1.5m² mats across the slope was laborious.

To add to this, the area chosen to be replaced – the waves – was one of the most technically difficult.

The clean began with the entire main slope being taken apart and rolled back so that a years worth of debris could be swept clean. Broken ground anchors, driven 2 foot into the hardened ground were replaced, and the mats were re-laid. 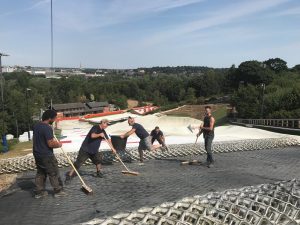 Next, the existing matting on the waves was removed and the area swept clean. 240 brand new mats were laid on the waves and were shaped and cut to fit the terrain, attached to ground anchor cable and tied together.

The team of Lee, Liam, Rob, Smithy, Phil, Austin, Dave, Josh, Olli and Henri worked tirelessly together. Their dedication to the task enabled the replacement of mats on the lift track, a task that hadn’t been deemed as feasible at the planning stage.

New LED floodlights were also installed to upgrade the existing lighting during the close down.

Feedback from the first users of the waves has been hugely positive, thanks to the hard (sweaty) work of the slope clean team.